Always there when you need a cab.. 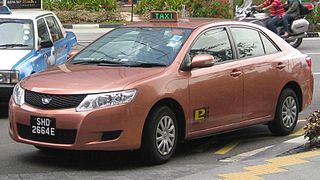 Prime Taxi is one of the smallest and newest player in the Singapore Taxi market, with just under 100 taxi cabs using petrol and Compressed Natural Gas (CNG) bi-fuel models since August 2007.

Prime Car Rental & Taxi Services Pte Ltd (Prime Taxi) is wholly owned by Prime Leasing Pte Ltd, a member of Cheng Yong Group of Companies which is one of the biggest parallel car importer in Singapore.

Cheng Yong Credit Enterprises Pte Ltd, incorporated in 1978 is an established subsidiary of Cheng Yong Investment Holdings Pte Ltd. Since our establishment, we have developed ourselves into a leading company specializing in importing and exporting of new and used motor vehicles worldwide. Being a leading vehicle exporter and a pioneer parallel importer in Singapore, we are committed to providing convenient, quick and professional services to our customers. At Cheng Yong, the pursuit of excellence in customer service is always a top priority.

by Boon Chan, The Straits Times

Call service: The system was quite efficient, with calls answered within one minute. While the operators’ responses were swift, there were no cabs available on two occasions. Also, one of my calls got cut off.

Punctuality: The promised waiting time of five to seven minutes was met both times. On the second occasion, the cab arrived almost at once, to the envy of my colleagues.

On the trip to Paragon Shopping Centre, the driver helpfully suggested letting me alight at the taxi stand at the back of the building in order to avoid making a huge loop.

Verdict: The small fleet of taxis on the road proved to be a nimble one, perhaps because it is easier to keep track of the 350 vehicles in the stable.

The downside was that half the time, there were no cabs available.

It would also have been useful if the operators had suggested the new hotline of 6-DIAL-CAB as an option when Prime cabs were not available.